ABOUT THE WEARING OF MEDALS  The following is from a letter from the Assistant Secretary, Awards and National Symbols, The Department of The Prime Minister and Cabinet.

Over a number of years some ex-service organisations have created and distributed ‘commemorative medals to mark particular periods of military service. These medals have no official status.

You should be aware that the government has created a number of official medals that commemorate certain events, for example, the 80th Anniversary Armistice remembrance Medal, the Australian Sports Medal and the "Anniversary of National Service1951-1972 Medal"..

Only those medals, decorations and honours, which have been created under the prerogative of the Crown have official status. Such medals should only be worn in accordance with The Order of Wearing Australian Honours and Awards on the left breast either on an official uniform or civilian dress.

Official medals worn by relatives of a deceased veteran should be worn on the right breast.

Ideally, unofficial medals should not be worn. However, if they are worn as the occasion demands, they may be worn on the right breast.

This advice is based on official protocol and practice.

The correct sequence of your medals are as shown 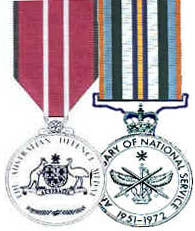 To be worn on your LEFT breast